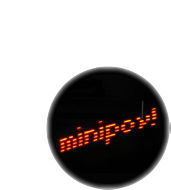 Hooray! You have a kit! Here's how to make it into something nifty.

Important Note: If you have an older MiniPOV kit (say, pre 5/2005) and it doesn't say v2.1 on the PCB, or theres no "sensor" socket, you have an original MiniPOV and you should use the older instructions. The part numbers are the same but the firmware and placement are slightly different.

Important Note #2: Rushing to get your PCB files in by a deadline is not a good idea, there is a typo in the silk screen of the v2.1 PCBs. If you're planning to use the sensor socket, be aware that the +3V pin ' +' is marked 's' and vice versa. this has been fixed in 2.1a

There are a few tools that are required for assembly. None of these tools are included. If you don't have them, now would be a good time to borrow or purchase them. They are very very handy whenever assembling/fixing/modifying electronic devices! I provide links to buy them, but of course, you should get them whereever is most convenient/inexpensive. Many of these parts are available in a place like Radio Shack or other (higher quality) DIY electronics stores.

Check to make sure your kit contains the following:

Learn how to solder with tons of tutorials!

Don't forget to learn how to use your multimeter too!

Put 2 AA batteries into the holder and turn it on. The microcontroller is pre-programmed to blink each LED in order. If one of the LEDs doesn't turn on or off, check the soldering connections and make sure its not in backwards (you'll have to desolder it). If -none- of the LEDs turn on, use the multimeter to verify that there is 3VDC between the red and black wire on the battery pack, and that the microcontroller is in right also heck to make sure that the LEDs aren't flipped.

Tip: If you bought a kit, the LEDs are oval which means they can be placed closer to each other. This will make the image smaller but can improve short-range visibility. I bent these after soldering them, so they're a bit crooked. If you shape the LEDs before soldering you can probably get tighter spacing. 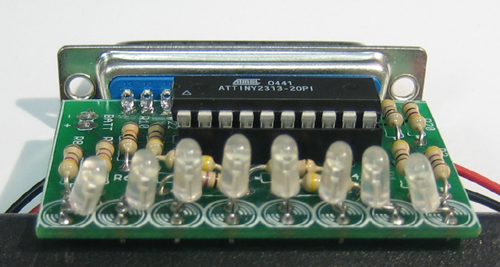 Program
Now that its assembled, you can reprogram the chip with persistance of vision code, to display custom messages & images. To program the chip you will need a computer with a parallel port (basically, any PC).

If you're running Windows:

You can also program the hex files using avrdude-gui.exe, which is installed with WinAVR:

If you're running Linux (or another unix-like OS): (from Steve Lacy's page)

Note: if you are trying this out with a new microcontroller (i.e. not from a kit) you'll need to burn the fuses first, otherwise it won't work right and might not be programmable. Run make burn-fuse while the minipov is powered and connected to the parallel port.

Note 2: When plugged into the parallel port, the LEDs may light up oddly or dimly, this is normal.

Now its time to put a custom image into the POV toy. Using your favorite text editor, open up the file mypov.c in the downloaded firmware directory.

Near the top of the file is a table called image[]. Each entry in the table is an 8 bit number (which is displayed in binary: B8(00000000) through B8(11111111). The 'B8()' just indicates to the compiler its in binary not in decimal). When the microcontroller starts up, it basically goes through the table and uses the value to determine whether each LED is on or off. For example, if the value is 01010101, then all the odd LEDs are on. If the value is 00000011, then the bottom 2 LEDs are on. After drawing the desired design on graph paper, go through each line and edit image[], adding or removing lines to make the table the right length. The table can be more than 500 lines long. (Hint: the easiest way I've found to do this is to copy enough 'B8(00000000),' lines to fit the size of your design, then enter in the 1's in insert/overwrite mode, which almost all text editors have) Now count how many lines you've got and put that number into the variable imagesize (which is defined right below the image[] array) Thanks to suggestion by David C., I have fixed it so it automatically sets imagesize to be correct. Thanks!

Compile mypov.c by opening a command window, going to the directory and typing in del mypov.hex (or rm mypov.hex) and then make mypov.hex. This should create a new mypov.hex which you can upload to the MiniPOV (by typing make program-mypov)