RGB Pixels are digitally-controllable lights you can set to any color, or animate. Each pixel contains an RGB LED and a controller chip molded into a 'dot' of silicone, with flanges so they can be pushed into holes in thin sheet material. The dots are waterproof and rugged — they're typically used to make outdoor signs.

You can pick up RGB pixels in strands of 25 from the Adafruit shop.

A ball of LEDs:

A matrix or video wall can also be created, as with our Adavision kit:

Our 12mm pixels use an 8mm diffused RGB LED — diffused pixels mix colors nicer. At 5 Volts, they draw a maximum of 60 mA per pixel: 20mA each for red, green and blue. 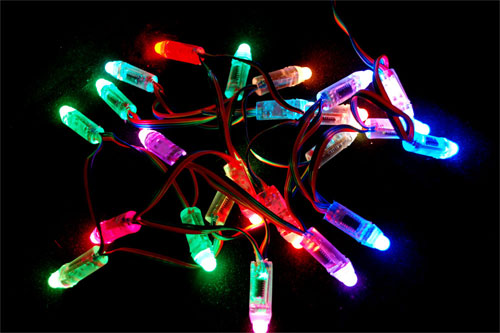 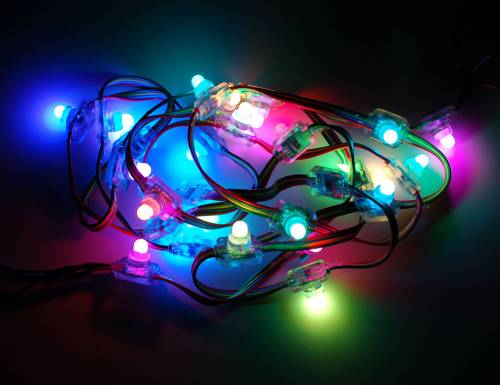 The LED pixels are spaced along a strand of ribbon cable, with about 3 inches or 80mm between pixels. If additional distance is needed you can cut the ribbon cable and solder 4 wires to extend the gap to the desired length. 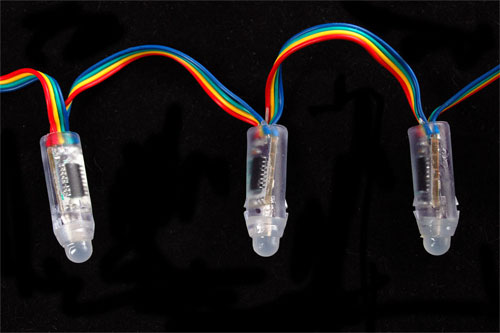 Each single 12mm RGB LED pixel can draw up to 60mA from a 5V supply. That means a strand of 25 can use up to 1.5 Amps. Of course this is assuming all the LEDs are on. If you keep most of the LEDs off (by color swirling or patterns) the power usage can be 1/3 this or less.

We suggest a nice switching supply for driving LED pixels: either a 5 Volt 2 Amp supply for a strand or two, or our 5 Volt 10 Amp supply for larger installations. For really massive projects, a slightly modified ATX computer power supply can provide 30 Amps to power upwards of 500 pixels!

IMPORTANT: Never, never connect more than 5 Volts to the pixels! This will permanently damage them!

As shown later, connect ground to both your power supply and microcontroller. Then connect the 5V pin to the power supply. A large capacitor (1000uF or so) between 5V and ground is a nice addition to keep ripple down.

Each pixel contains a small microchip within the silicone dot. The WS2801 LED driver chip is custom designed for this purpose. These chips are very simple to communicate with — all they do is shift color data in from one pin and out another. To issue data from a microcontroller such as an Arduino, one "shifts out" 24 bits of color information — the first data out corresponds to the pixel closest to the microcontroller. To write data to 10 LEDs, you would issue 240 bits (10 * 24). Following the data, a 500 microsecond pause will "latch" the data and show the new LED colors.

PLEASE NOTE: THE LED DRIVER CHIP AND WIRE COLORS HAVE CHANGED FROM EARLIER BATCHES OF THESE PIXELS. ANYTHING PURCHASED AFTER AUGUST 2011 SHOULD MATCH THE FOLLOWING DECRIPTION. We initially sold LEDs in this form factor using the LPD6803 driver chip (BEFORE August 2011). If you are using those pixels, please go to the 20mm pixel tutorial — the wiring and code are the same, and nothing further here applies. After switching to the WS2801 chip, the first batch used different wire colors, but the order and functions are the same as described below.

Though it looks like the 4-conductor ribbon cable is continuous, it isn't! The ground and 5V lines pass through from one pixel to the next, but the two data control lines are different on the input and output sides. The input side goes to the LED driver chip, which then drives its own output to the next pixel in the strand.

When connecting these pixels to a microcontroller, make sure you're connecting to the strand's input pins! Best way to distinguish the correct end is to closely examine the circuit board embedded in the first pixel. If its a WHITE PCB, try looking for the "INPUT" label. If connecting multiple strands together, make sure the output of one strand goes to the input of the next. 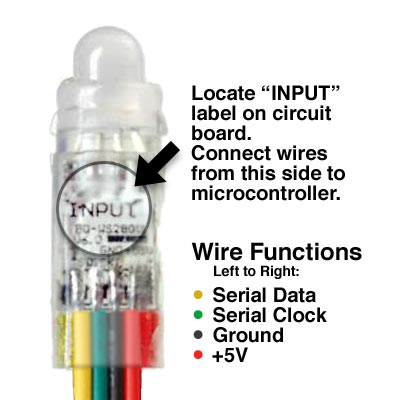 If the PCB is Green, look for the black rectangular chip, this is the input 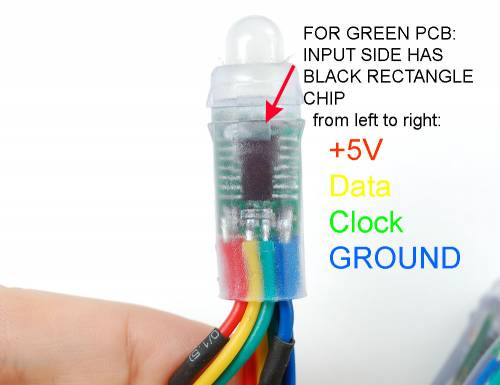 If you have flat pixels, look for the embossed ARROW on the side of the pixel, connect to the end that's the 'tail' of the arrow (not the pointy head as that indicates which way the data travels down the strand' 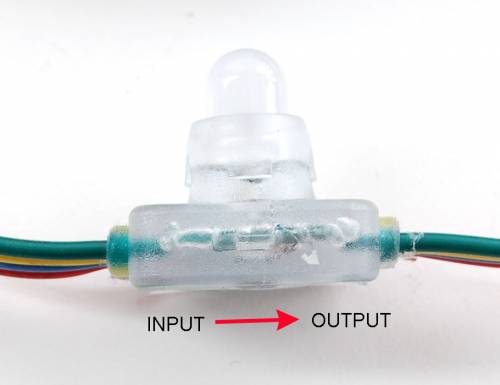 Wiring is pretty easy since there are only 4 wires. The only important thing is that you should not try to power the LED strand from the Arduino's 5V line, unless you'll be using only a few LEDs at a time. The Arduino is only meant to drive about 500mA of current, and as we saw earlier, a fully-lit strand can require 1000mA or more! This is why we suggest using an external 5V supply. 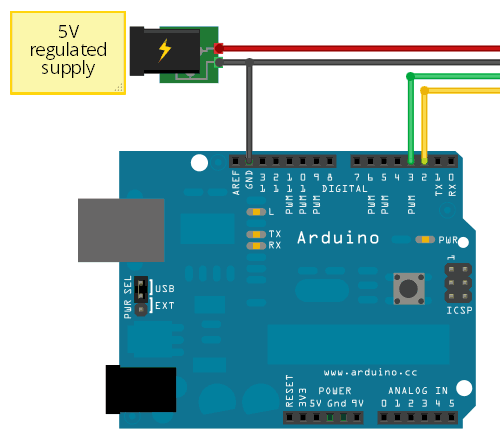 Our Arduino library (explained below) can use any two pins, but the examples are written to use pins 2 and 3 as above.

To download the Arduino library, visit the repository on GitHub. Click the DOWNLOAD ZIP button near the upper left, extract the archive and then rename the uncompressed folder to Adafruit_WS2801. Confirm that this folder contains the files Adafruit_WS2801.cpp and Adafruit_WS2801.h and the examples folder.

Place the Adafruit_WS2801 folder inside your Arduino libraries folder. You may need to create this folder if it does not yet exist. In Windows, this would be (home folder)\My Documents\Arduino\Libraries and for Mac or Linux is (home folder)/Documents/Arduino/Libraries We also have a tutorial on library installation.

After installing the Adafruit_WS2801 library, restart the Arduino IDE. You should now be able to access the sample code by navigating through menus in this order: File→Sketchbook→Libraries→Adafruit_WS2801→strandtest

Let's look through the strandtest example code. To use the library in an Arduino sketch, you'll first need to globally declare a WS2801 object to talk to the strip. It is invoked with three variables: the number of pixels and the data and clock pins:

begin() initializes the library, while show() refreshes the displayed colors of the LEDs. You'll need to call show() after changing any pixel colors to see this reflected in the LEDs. This way you can change the entire strip at one time (it takes the same amount of time to change one pixel as it does for an entire strip, because the full strip data must be issued regardless).

Let's look inside an example function, colorWipe(). This creates a 'chase' sequence that fills the strip up with a color. It is basically a loop that increments through every pixel (which you can query with the numPixels() function) and sets the color of each (incremented with i) to the value passed (c — colors are expressed as a 32-bit variable type, though only the bottom 24 bits are used). The strip output is then updated with show(). Finally there is some delay (otherwise this would happen instantly).

Below that is a helper function that converts a color from separate 8-bit red, green and blue values into a combined 24-bit value (suitable for passing to colorWipe()). The brightness range is from 0 (off) to 255 (max brightness).

For example, in the loop() function we call colorWipe(Color(255, 0, 0), 50) which will fill the strand with full-brightness red light, pausing about 50 milliseconds between pixels.